Its the Friday after Thanksgiving and I hope that everyone got their fill of turkey, pie and family! I know I got my full of all of those, but I also got my fill of “Turkey Trot”. As I referred to in one of my previous posts, “Turkey Trots” have been popping up in so many towns here in New York that it has become pretty easy to find one and to participate in one. The one that I ran, the Garden City Turkey Trot, took entries pretty much right up until the 10:00AM start of the race. When they were all said and done, close to 4,000 participants took part in the 5 mile race thru the streets of Garden City. A big salute to the committee that organized the race as they not only put on  successful race, but they also gathered food for the local food pantry so that no one went hungry on this special day!

For me, this was the second year in a row that I participated in the race. Last year I ran the race and ran my fastest race pace wise that I had ran in 2016. In 2016 I completed the course in 38:39 (roughly 7:35 pace). What would this year have in store? I went into the race not being sure how I would do. I had not run a road race since the Staten Island Marathon back in the beginning of October. Since then I had cut back my running a bit. In turn, I have been increasing the amount of weights that I have been lifting at the gym. I’ve been strengthening my quads a bit more and my hamstrings and of course my upper body as well. Also adding to my uncertainty about my results Thursday was that my pace on my training runs had not been faster than 8:00 per mile in weeks. Lastly, it was a pretty frigid morning with the mercury barely getting above 32 degrees but the show must go on!

At the Start Line Of The Garden City Turkey Trot!

My first mile was a bit congested traffic wise. A lot of folks were up at the front of the start that probably didn’t belong there but its Thanksgiving, everyone is just thankful for running today! First mile was not bad. Clocked a 7:13 for the first mile. I vaguely remember my first mile in my previous year’s run being around 7:15 and I thought that was pretty fast. I did go onto slow down my mile pace over the next few miles. This year was going to be a bit different.

Mile 2 had its share of uphills after mile 1 had included down hills. As such when my split for mile 2 came in, I knew this was going to be a different day. My split was 7:12 for mile 2 with uphills! Mile 3 included the longest uphill of the race. My split for mile 3 was 7:13. That 3rd mile drained me a bit and I was eager to see how I would be after the 4th mile. A water station was set up in mile 4 but I declined it because I tend to splash when I take water at water stations and it was too cold to be wet! In that mile, we passed by a large group of spectators that naturally gave us a boost. They accomplished their job. My split for mile 4 was 7:07. When I looked at the cumulative race clock as I passed by the 4th mile marker it was under 29 minutes and that was the race clock which meant my time was likely faster since I started a little bit behind the start line. At this point I thought to myself, unless I took a bullet in the last mile or collapsed, this was going to be a PR!

Then I set my eyes on a woman who was in front of me the whole race. The distance between her and I was consistently between 10-15 yards. She likely never saw me but some how every time I sped up, so did she. With about a half a mile left, I decided to end the song and dance between this lady and I. I blew past her but with a half mile left, I can tell you that the weight training I have been doing kicked in. I was afraid that I started my kick too early but my arms believe it or not helped to increase my strides. My quads helped keep my stride steady. With about a hundred yards left, my GPS mile split was announced in my head phones. 6:59! Damn – broke 7 minute on my lat mile split! Cumulative time was 36:12, more than two minutes better than last year! I couldn’t believe it!  I was exhausted after this race but I felt great! I didn’t envision running this fast at all but I will tell you that the weight training indeed helped. The legs felt stronger and pumping the arms led to longer strides down the stretch which undoubtedly led to a fast final two miles. I’ll say one final thing about this performance – it was fast for the distance but it was also fast period. My 5k split and my 4 mile split were both faster than I had ever run all out for either of those distances. Crazy right?

This race was not just special because of my time but also because of a couple of other factors. First, if you see my Under Armour Map My Fitness stats up above, I burned 723 calories. Guess who was having pie Thanksgiving night with zero guilt! Haha! But what really makes this race special is that my wife ran it. My wife is new to running and admittedly is not ready to tackle the distances that I do. As such, we don’t run together as she would rather I run ahead. I would want nothing more than to run with her but as I always tell lot of folks, run your race, not anyone else’s. Further my wife is an asthmatic, but let me tell you, that being an asthmatic does not stop her from running. As I have mention so many times, she has set out a goal to increase her mileage while controlling her asthma. She did a 5 k earlier this year and then we did a 4 mile run together in June. On Thursday she had signed up for the shorter version of the 5 mile race which was available, the 1.5 mile fun run. She was going to do this with my youngest daughter but when the weather was too cold, my daughter bailed and opted for staying in a warm bed on thanksgiving morning. This gave my wife the chance to take on the 5 mile race. An opportunity had presented itself and she seized the moment and crushed it. This is an amazing feat for her and I was ecstatic about being there to witness it. In a year she ran a 5 k, a 4 miler and a 5 miler. I had mentioned to her running a 10k earlier in the year and she gave me the look of “No way”. After Thursday I mentioned to her that she is just over one mile away in distance from that 10k and she couldn’t believe it. Her progress this year is truly an inspiration for people that say “I can’t run”. Oh yes you can!

Now that Thanksgiving is over and you know that the holidays are looming in December. Resolve for the next few weeks to get up and get out and burn some calories. Go for a run. If not start with a walk with a light jog. Remember, something is always better than nothing! 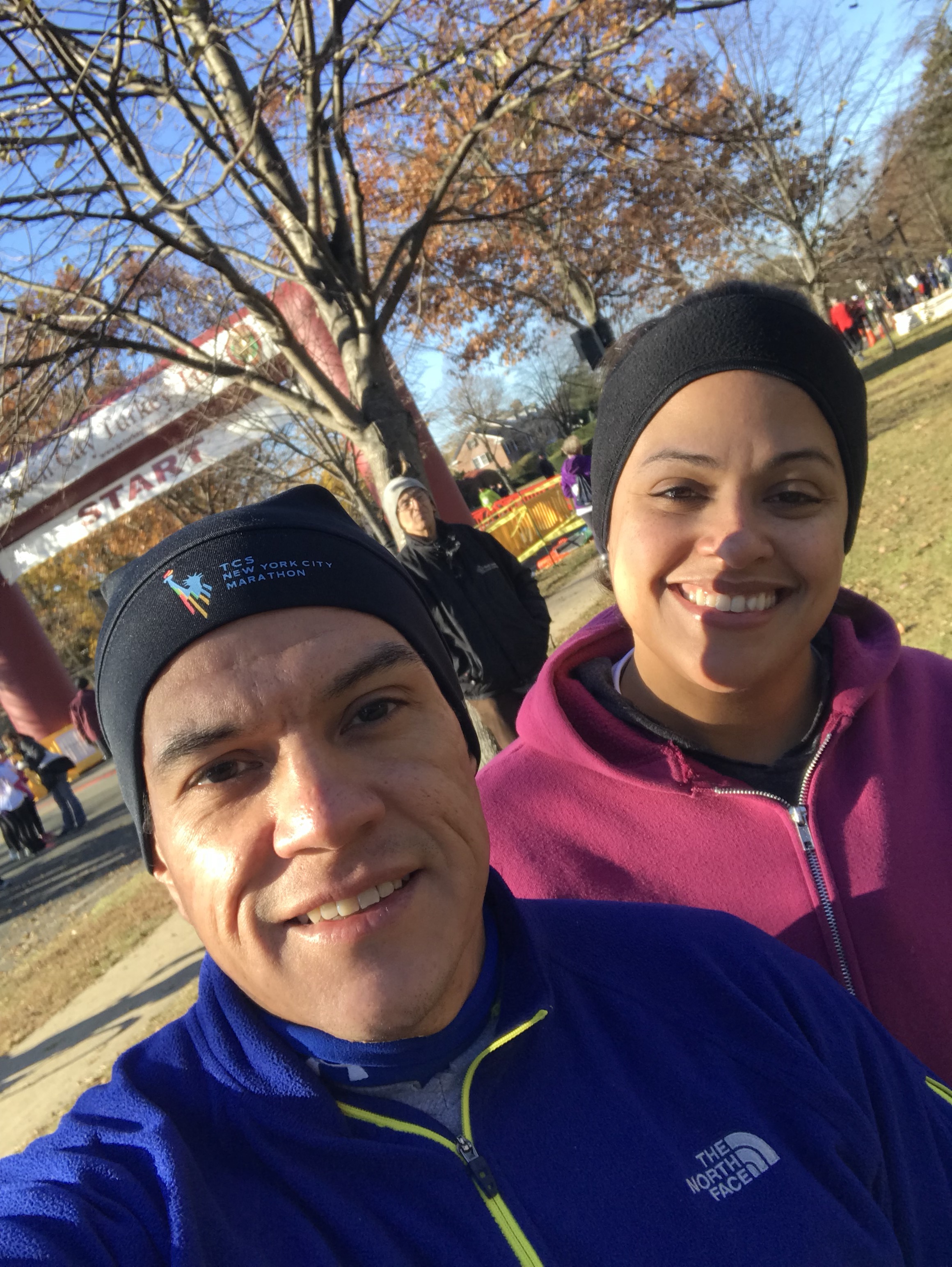