Happy New Years to everyone out there!

The new year is here! If you were looking to put a resolution in play, well now is the time! I know I have been preaching that for some time and I am hoping that many of you will take me up on a change to get up off the couch and to start running. If not running, then something better than sitting on the couch! I will get into the New Year’s resolution thing however another day!

For me the new year will not bring about too much change in terms of a workout routine. However, that doesn’t mean that the learning stops. On day one of the New Year I already learned a valuable lesson and I was kicking myself when I realized it. On New Year’s day the gym that I belong to, Lifetime Fitness, had a themed “Commitment Day” for its members. For me, that is another way to get people to make a New Year’s Resolution. To commemorate the commitment day, they encouraged their members to run in a 5k run. It wasn’t considered a race because they didn’t time it. Running geeks like myself of course, chose to time it.

The temperatures of course were very frigid as New York City may never see above freezing ever again. I am convinced that my Christmas decorations may stay on my lawn til March because they are frozen in the ground. The mercury was at 11 degrees this morning at race time with a windchill of 0, zero, zilch, nada. My gym, in an effort to promote all of their classes and programs, had a wacky idea to do a pre-race warm up in the gym that consisted of an obstacle course of sorts. There were close to 100 runners this morning and I think everyone of them in unison told the gym instructors that they did not want to do a pre-race obstacle course? in the gym. Who wants to work up a sweat and then step out in 0 degrees? Helloooo???

When we assembled in the gym and gave them our gracious response of “No thank you”, we were whisked outdoors to the starting line. By the time I put on my hat, gloves and fired up my music and GPS, they were starting the race. Off the racers went and I hit start on my Strava app. As I did that, I dropped one of my gloves. After picking it up, I put my phone away and set on my way to try to keep up with the lead pack. The cold didn’t bother me too much on this race. I wore three thin layers, the bottom one being an Under Armor cold weather shell, tights, hat and gloves. I was fine with just that.

After settling into a comfortable pace and listening for my first mile split, I realized that I forgot to start my Under Armor Map My Fitness App. That’t the app that tells me my splits in my headphones after each mile. That’s the one reason that even though I have discovered Strava, I still use the UA Map My Fitness app. To my knowledge I do not believe that Strava does that as well, but if they do, someone please tell me how to activate that! Pissed off now that I couldn’t find out my splits, I decided oh well, its not really a race, its just commitment day. That’s when I realized that there were only 6-7 people ahead of me in the race. Aaaannnddd just like that, this became a race!

In a 5k there really is no time to pace yourself. The more I run 5k’s the more I realize that you are pretty much running hard almost the entire time. In the process of making this a race, I ended up tweaking another calf in the last mile of the race and had to slow up a bit. I managed to finish 5th overall in the race. Mark those words because I will not finish better than 5th l year!

If my calf had not started to bother me, I might have finished third. First and second were well out of reach so my calf made no difference there. Crossing the finish line in 5th, I was eager to see my time, since I was not getting my splits from the Under Armor app. I took my phone out of my running arm band and Strava looked back at me with nothing, zilch, nada. Seems as if when I dropped my glove at the start of the race, I actually didn’t start my Strava app either. Pissed off is not even the word. I was pacing back and forth at the finish line like a mad man. 3.1 miles out the window and quite possibly a PR out the window. Although I don’t know if this time would have counted since it was not officially timed. 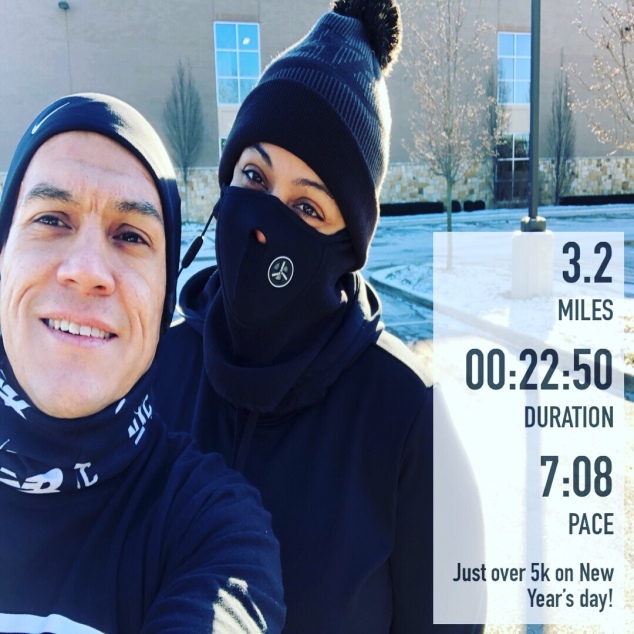 When it was all said and done, I looked on the bright side. I woke up on New Year’s without a hangover, I ran a 5k on new year’s day to start off the year on the right foot, and I got a medal for my troubles. Two valuable lessons however were learned. Never start a race without switching on my Map My Fitness app an never start a race without switching on and ASSURING that Strava is on. I don’t care how many seconds I lose at the start, not having your run tracked might be the most frustrating feeling in the world! Oh well at least the lesson was learned on the first of the year! Hopefully never to be repeated again!

As the weather continues to remain cold, I have to say I am getting used to this cold weather running. Anything north of 30 may be a heat wave for me! If you are from the east coast, how are you getting along with the cold weather? No matter where you are from, how was your New Year’s?

75 days til the United NYC Half for anyone running that!