I have to admit, I have been fortunate when it comes to running. I have always managed to turn to running as an escape from madness. It has in its truest form, become a form of therapy for me. Part of that stems from the fact that I do push myself hard when I run and 99 times out of 100, I am usually pleased with the end result when I look back at any of my runs regardless of whether it is training or a race. There is no question that it boosts my self esteem and confidence as it does for a lot of people. These aren’t the only things that running has done for me. I have met so many wonderful like minded people thru running. Even today, I come across so many new people that all share the same passion for running that I do. For me, running is like the gift that keeps on giving.

So it doesn’t surprise me that this past weekend, running was up to its tricks again. Last week I stumbled across an event on the New York Road Runners website. At first it came across as an attempt to advertise the upcoming Millrose Games. For those that may not be familiar with the Millrose Games, it is the longest running track & field meet that exists today. Those who have won at Millrose Games have gone on to become elite track and field legends. The event that I stumbled upon was a 4 mile group run sponsored by New York Road Runners that would allow members to run with some athletes that would be competing at the Millrose Games. Going into this run on Sunday, they wouldn’t say which athletes would be running with NYRR members, simply that we wouldn’t be disappointed!

I took the bait and signed up even though I had no clue who was going to be there.

The one thing about professional runners is that unfortunately they go relatively unknown in public. The sad truth is that track and field is not that popular with main stream sports fans. Recently however there has been an uptick in American middle distance and distance runners that has captivated some fans. Shalane Flannigan’s win at this past year’s New York City Marathon is a prime example of that as was Matthew Centrowitz’s win at the Rio Olympics in the 1500m. So when I arrived at the NYRR run center and saw a group of about 30 people gathered for the run on Sunday, even though I was excited to be there, I had no idea who were the NYRR members like me, and who were the athletes competing at Millrose! Before I knew it, I had taken off my jacket and barely laced up my sneakers and we were off on running on a Sunday morning heading to Central Park! 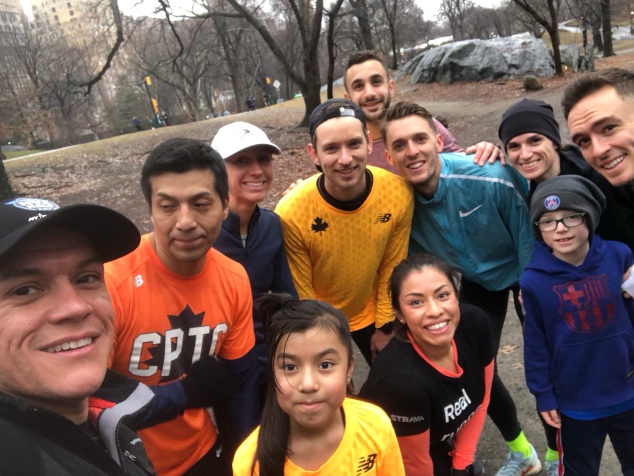 In Central Park on Sunday with NYRR members and some Millrose Games Athletes!

As we entered the park, four runners took to the lead. The pace for this run was advertised to be between 8:00-12:00 minute mile pace. These guys were going faster than 8:00 minute mile pace. These guys clearly must have been the Millrose athletes. I noticed on one of them that he had a gold rope chain bouncing in and out of his shirt. I remembered back to the 2016 Olympics, an American runner that ran the mile who also had a rope chain that he wore during his race. That American was Robby Andrews. Could this be him? At the moment however, I had some hills to deal with at Central Park and a pretty rapid pace that these Millrose athletes had set!

The pro runners stopped once they were two miles into Central Park and waited for us so that we could turn back around. I was the first one to reach these guys. I introduced myself to them and amongst them were Eric Avila, Charlie Grice and I had guessed right earlier, the American Olympian Robby Andrews. Grice was also an Olympian for England in 2016.

So lets stop for a minute. I am in Central Park on a Sunday morning running with professional runners, two of them who are Olympians?

I decided to run back with Robby Andrews. I had watched this kid run before. He was an Olympian at the mile. But this wasn’t the main reason why I was a fan of his. He also  excelled at the 800 meters which was my race in high school. In his career he has run a 1:44 for the 800 meters and a 3:53 for the mile. Both of those are blistering times! As we started running, the conversation was easy and casual. I could have been talking casually to someone on my train ride to work instead of running an 8:00 mile in Central Park. He told me about how he got into running thru his father who was a track and field coach when he was younger. He recounted that for many years as a kid, he would run one track and field race a year. This and his father’s passion for track and field  was enough to keep him somewhat in love with running. But he admitted that his true love was basketball. He swore he was going to play for the North Carolina Tarheels in college. Now an Olympian, I think he made out ok! 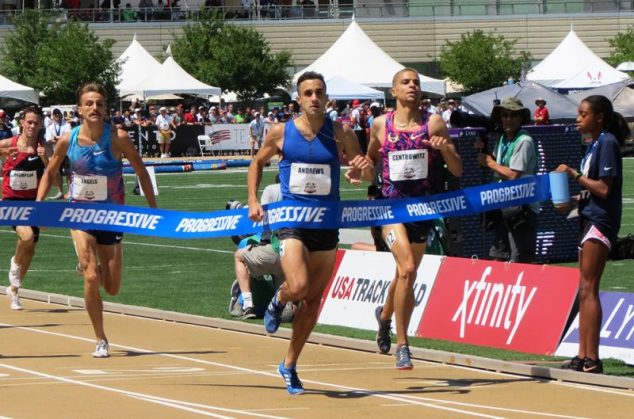 Robby Andrews winning the USA outdoor title in the mile back in June 2017.

Later as we progressed in our run, I asked him what race he would be running at the Millrose games. He responded by saying in an excited tone, that he would be running the Wanamaker mile. If Millrose was a prestigous meet, the Wanamaker mile is the jewel at that prestigous meet. The race has been won by track and field royalty. Eamonn Coghlan, Marcus O Sullivan, Bernard Legat and Matthew Centrowitz are just a few names that have won this race multiple times in the ninety plus years that the race has been run. The field for Saturday’s Wanamaker Mile is an impressive one as it will include multiple Olympians such as Charles Brice and Nick Willis. It will also have Andrews though who is the reigning USA outdoor champion at the mile. In June of 2017, Andrews came from way back in the pack to sprint past Olympic champion Centrowitz to claim the 2017 USA Championship. You can watch that come back here. Andrews would add that he is particularly excited about running the Wanamaker mile. He revealed to me that he won the Boys High School mile at Millrose Games when he was a high schooler. In 2009 he won that race with a time of 4:17. He further revealed to me that no one has ever won both the High School mile at Millrose and the Wanamaker mile. Mind you we are still running thru Central Park, and I let out a big “Whoa!” when he told me this. Not only is this guy an Olympian, the reigning US Champion in the mile, but he has plans on doing something no one has ever done before at the Millrose Games this Saturday. We continued to talk about my running and my upcoming races. This guy was genuinely interested in the races I was running. We talked about my upcoming United NYC Half Marathon and how the course was changing.  I mentioned how I was also running the marathon in November and he said he would likely never do a marathon but encouraged me to stick with the training and wished me the best.

I will never step on a baseball field with the league leader in home runs and toss a baseball around with them. I’ll never shoot hoops with an NBA all star. But I got to run a few miles with an Olympian, US Champion and a participant in this weekend’s Wanamker mile. I tell you, running has been very good to me!

The Millrose games will be broadcast live this Saturday on NBC. The Wanamker mile is the last event on the schedule. Tune in to see if Robby Andrews can do what no runner has done at Millrose! If he does, am I allowed to take a little credit for that since we kind of sort of “trained” together for this race? (haha) .

Regardless, its going to be pretty cool just to watch Andrews on the track regardless of where he finishes. A genuinely nice guy deserves to win but of course, nothing is given in the world of track and field. I’m confident though that Andrews is going to put up a fight. 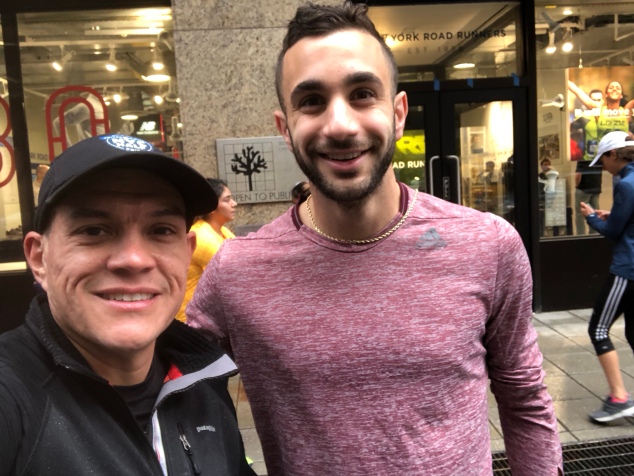 With Andrews outside the NYRR run center after we crushed 4 miles!